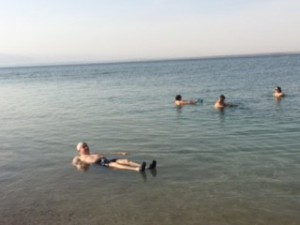 I wake up to the news that against all predictions, His Donald Trumpness – the ‘joke’ candidate is the new US president elect. Television pictures show that even Mr Trump seems slightly startled by the new reality. Let’s not forget that before the vote he had his sights set on exposing a Hillary Clinton ‘rigged’ win, but enough of him. There’s something else that is leaving me breathless with disbelief and causing my legs to fly out at unusual angles to boot. Strictly Come Dancing? Nope. It’s a dip in the Dead Sea.
END_OF_DOCUMENT_TOKEN_TO_BE_REPLACED