The unplanned New Year’s Eve ‘fireworks’ in Dubai caught us all napping. On the most predictable evening of the year we could see fire had broken out at the luxury hotel across the road but had anyone else noticed how rapidly it was moving up the 63-storey building?

In the next few minutes news and alarming pictures of the escalating disaster were travelling around the world. I have never been more grateful for mobile phone technology and social media. After an anxious wait we could ascertain the whereabouts and safety of our two friends who live in the hotel’s residential apartments and offer refuge to others who were evacuated from a nearby restaurant. As messages came in from friends and family around the world we could quickly reassure them that we were out of harm’s way, though, yes, this was happening quite close to where we live.

Come 12 o’clock the planned pyrotechnics went ahead, regardless of the smoke and flames which accompanied the Happy New Year messages. 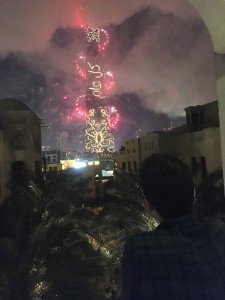 Black smoke was still billowing out from the hotel two days later and by then we learned that one friend had probably lost everything in the fire. Another was waiting to be allowed in to see if her apartment has been deluged by the automatic sprinkler system.

When the authorities decided that the area around the hotel was safe for pedestrians, the crowds returned. Before the fire the cameras and selfie sticks were angled to take in the Burj Khalifa. Right now the tallest building in the world has competition as tourists seem to be attracted to the opposing view, which offers a fire-damaged hotel as a backdrop!

The events of the last week have made us all think about what we would want to save, should we have to evacuate our building. Naturally, personal safety takes priority over everything and in an emergency there isn’t necessarily the luxury of time to gather your stuff. Having considered the inconvenience of not having basic ID documents or even a change of clothes to hand, I am persuaded that it could be sensible in this unpredictable world to consider what items would be helpful in such a situation and to actually put them in a small bag, just in case.

I promised my eldest son (who takes these things very seriously) that I would do this. I am quite a material girl and it was a surprise to me that I could be so practical but some of my choices would definitely make me feel better able to face the world if I had to abandon the comfort of home. Yes, I would like to take all my Bruce Springsteen memorabilia and music but should the worst happen, it could all be repurchased. Note to self – check on insurance.

So here is my list, bearing in mind I am not living in my home country and that I would probably be wearing the items of jewellery that mean the most to me.

• A reasonable supply of cash

• Basic set of toiletries and make-up

• Spare pair of glasses and sunglasses

What would you take? 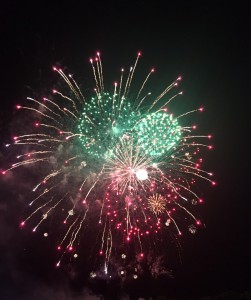