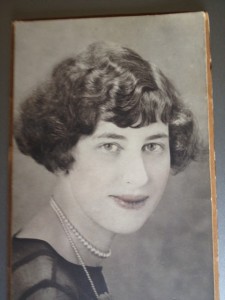 The lovely young woman looking so confidently into the camera only had a few more years left to live when this photograph was taken. I am guessing this formal, studio portrait marks a milestone age, maybe a 21st birthday. Her name is Rose De Haan and her death certificate states that she died at the age of 25. Three days earlier she had given birth to a daughter. The baby was my mother, Sylvia Rose.

We found this photograph after mum died. We had never seen it before. On the back, in mum’s handwriting it simply says: My Mother. Now beautifully framed, the photograph hangs on the wall in our apartment in Dubai. Rose should have had a long life as a mother and grandmother but in 1920s East London, pregnancy and birth was hazardous. The cause of death was Post-Partum Eclampsia, a complication following delivery involving raised blood pressure. Untreated it leads to fatal seizures and was a common cause of maternal death at that time.

The birth of a first child should be a time of great hope and joy. In this case terrible grief smothered the congratulations.

I always knew my mother was adopted by an aunt and uncle because of this great loss but since finding this photograph I have wanted to know so much more. A few months ago I enrolled on a screenwriting course and re-imagining Rose’s story became something of an obsession. In my fantasy version of events Rose didn’t die – she disappeared and changed her identity but was reunited with her daughter decades later. A psychiatrist would have a field day with that one.

Still the questions remain. Who was Rose and what impact did she have in her short life? A few years ago a friend in Harrogate investigated our family history on my mother’s side. The De Haan family that Rose married into were Dutch immigrants. Her own parents moved to London from Canada. Somehow I didn’t ask the questions I should and now my mother is gone too I have had to seek some of the answers from other sources. Mum rarely spoke about her mother, mainly, I suspect because she knew very little about her. The adoption within the family, coupled with her father’s subsequent second marriage, prompted a general conspiracy of silence to avoid upsetting the applecart. What she did know and felt as she grew up she wrote down and gave to us as a record of her life and a document we could pass on to our children.

We do know that Rose chose the name Sylvia for her daughter but grief stricken relatives insisted on calling her Rose as a child. As an adult mum reclaimed her rightful first name.

I have looked back at the information mum wrote down and read that Rose had an older sister called Hetty. The pair were close in life and death as another tragedy occurred in this family. Hetty contracted TB two years after losing her precious sister and left behind two little boys, Leslie, aged four and Harold just two.

In later discussions with these cousins mum learned that the sisters’ good looks and personality made a favourable impression on everyone they knew. It was noted how Rose was adored and admired by the many members of her husband’s family for her sweet nature and genteel manner.

The friend who helped with the family history suggested that copies of Rose’s marriage and death certificates would be informative. She very kindly arranged for copies of both to be sent to me. I was also able to do my own research as another cousin had been able to find out where Rose might be buried. As I already knew the day, month and year of death the burial records authorities were extremely helpful and very amenable to communicating by email. From Dubai, the researcher’s note, gives a precise location of Rose’s grave. The subject of the email is ‘Your Grandmother.’

When the certificates arrived, Rose became very real indeed. She married at the age of 24 so the newlyweds only had one year together. The document states she was a cigarette maker. Before the big corporate brands dominated the market the tobacco industry was a major employer in the East End of London and there were cigarette and cigar factories dotted around the Hackney and Whitechapel areas.

On a brief trip back to the UK I decided to visit her grave so took myself off to the depths of East London. Cemeteries are not especially cheerful places but the older sections of this one are particularly gothic as many of the headstones show signs of their great age. Weather damage and stones leaning out at precarious angles are the norm. Rain and leaden skies goes without saying in the first week of November.

In the end it was very easy to locate – the name seemed to leap out from the many words on this stone. So many words needed to express the utter tragedy of this death and the great well of grief for those that remained.

More words and a separate tribute from the two little nephews, Leslie and Harold, to ‘our dear Auntie’.

As I bend down to take a photograph something else comes into view, something I could easily have missed. I had noticed the decorative stone pot set on black marble but there is an inscription too. Seeing my mother mentioned by name brings tears to my eyes. “A loving token to my dear mother, from Sylvia”. When this was added will never be known.

There is also a poem on Rose’s gravestone which seems entirely apt. It reads:

“You are not forgotten Rose dear,
Nor shall you ever be,
As long and life and memory last
We will remember thee”. 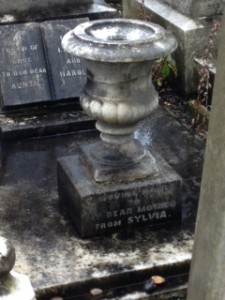