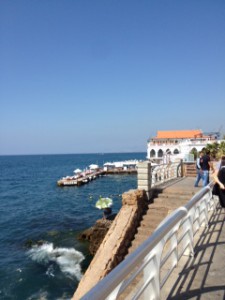 I can still hear the worry in your voice, echoing in my head from several months ago when I first dropped Beirut into the conversation. Well, Mum, I went, I survived and I’m back safe and sound. I would have rung you by now to tell you all about it but since we can’t have those conversations any more I thought I would write down what I would have liked to share with you about this trip.

No doubt about it, landing in Beirut after several months of life in Downtown Dubai is like stepping into the real world from a Disney animation. After Dubai’s ordered, manufactured facades, squeaky clean pavements and convenient living, Beirut’s raw, ‘take us as you find us’ approach required some quick adaptation on our part. It’s rough and ready, stuffed full of archaeological treasures, a little chaotic, but a city where visitors are made very welcome, nonetheless.

Shiny new apartment blocks appear to have been plonked, higgledy-piggledy, in and around the many dilapidated and damaged older buildings that remain visibly pockmarked with bullets from the civil war and more recent bombardment.

In the central areas that were completely destroyed the rebuilding has been better planned. Whilst Tim was involved in a business meeting I spent a morning strolling around the smart shops in the Beirut Souks, an attractive, modern interpretation of an outdoor Arab-style shopping market. After the usual indoor malls it made a pleasant change to be meandering in and out of the new walk ways and wider avenues in the Mediterranean sunshine.

Lebanon is much more liberal than the UAE in terms of clothing and lifestyle. Muslim women are more individually dressed with colourful headscarves worn mostly with western style clothes. We arrived in Beirut during Eid, the festival that marks the end of Ramadan so families and young people were out in large numbers to enjoy the live music, street food and craft market near our hotel. Beirut TV was there too, with a glamorous young presenter honing in on chef demonstrations and interviewing stallholders. 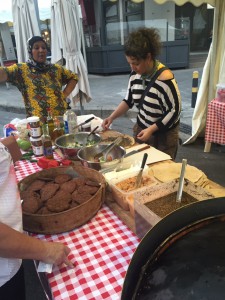 One night we ate at one of the seafood restaurants on the Corniche, the famous beach front promenade, full of bars and smart venues that cemented Beirut’s reputation in the 1960s as ‘the Paris of the Middle East’. Looking out across the sea to Mount Lebanon in the distance it was easy to imagine film stars like Omar Sharif and other rich and famous personalities sailing in on their yachts for some indulgent downtime here. You always liked Omar Sharif, didn’t you? ‘Dishy’ you called him. 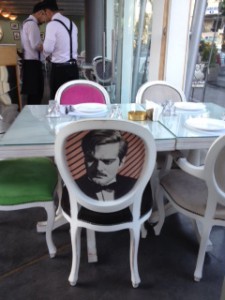 Lucky that we could walk off our dinner along the Corniche – we weren’t expecting the restaurant to supply a complimentary platter of fruit and dessert pots of chocolate, jelly and fragrant, Lebanese cream pudding! 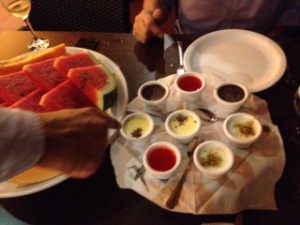 Other parts of Beirut are harder to explore on foot. We often found ourselves walking in the road to avoid the parked cars on the pavement or the increasing piles of uncollected rubbish. On the first night we joked that the bin men must be due the next morning but it turned out we had stumbled on an unfolding crisis. A contract for waste collection had not been renewed so the service was no longer operating – with alarming consequences. After a couple of days an unknown authority had thrown white powder over the stinking and growing heap. We concluded it must have been rat poison. As we walked into the road to avoid the smell, a car pulled up beside us. With windows wound down, the handsome young driver pointed to the eyesore. “Welcome to Lebanon. This is Lebanon.” What a shame the army personnel so in evidence around the city couldn’t step in to save this young man’s embarrassment and protect the population from an obvious health hazard. 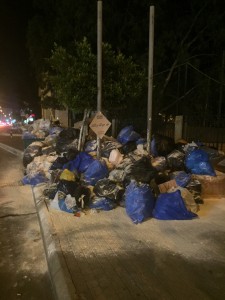 Taxi drivers are constantly scouting the streets for weary pedestrians and whilst a Lebanese colleague of Tim’s warned us that many are crooks, our experience didn’t bear this out. There are no meters so in theory they can charge what they think they can get away with. One took us where we wanted to go, gave us a mini guided tour to various landmarks on the way and then invited us to ‘pay as you like’. Yes we probably overpaid but no one is going to get rich from us paying the equivalent of eight pounds instead of five, are they? 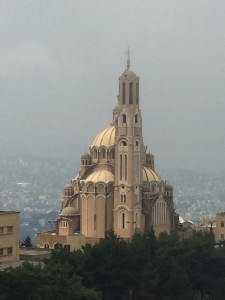 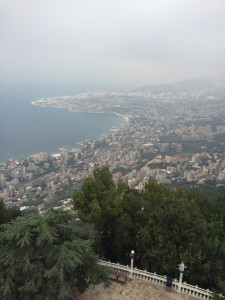 We decided to pay an official driver to take us to a few of the famous attractions outside Beirut so we got to see a little more of Lebanon during our stay. We went to the mountain village of Harissa to take in the view of Beirut from a Catholic pilgrimage site and then on to Byblos which is said to be one of the oldest cities in the world. The archaeological excavation site wouldn’t have been your thing at all but I enjoyed it. The weather was just so gorgeous, it was great to be out in it and taking in some of the beautiful views. Later on we went for a walk around the nearby shop and restaurant complex. There was a lot of jewellery and sandals for sale and I kept imagining you picking things up and bargaining over something that caught your eye. You wouldn’t have come back empty-handed as I did, that’s for sure. 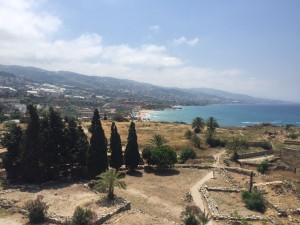 Later on we went to the see the amazing rock formations in the Jeita Grotto. I wasn’t prepared for the cable car journey which seemed to be an intrinsic part of this experience but I got through it with eyes closed. There was a boat trip on the subterranean lake included as well and that was quite relaxing, if a bit eerie. 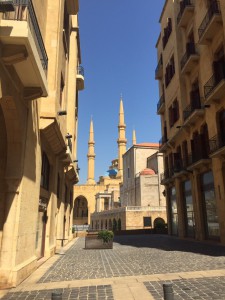 One afternoon we ducked into the Saint George Greek Orthodox Cathedral for some shade and discovered there was a museum in the crypt with some surprising exhibits. The Cathedral was badly damaged and vandalised during the civil war but before it was restored archaeologists uncovered layers of mosaics, burial places and artefacts from the Hellenistic, Roman, Byzantine, Medieval and Ottoman eras. I can see you yawning at this information but even you would have marvelled at the jewellery on display. Tiny stone necklaces and even a tiara! Best of all, did you know the Ottomans wore rings on their toes?

Well I guess that’s all for now, Mum. I am thinking of you all the time and missing your responses to my adventures so much.
Much love,
Ruth x

An Online Event for Family History, Ancestry and Genealogy Researchers