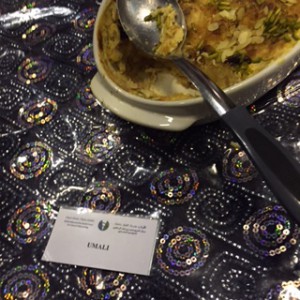 You don’t have to be here very long to notice that expats in Dubai vastly outnumber the local Emirati population. A recent BBC radio report states the current statistics are 1 in 9. The cultural mix from around the world is rich and diverse but perhaps because of that, aside from the very obvious social protocols, the customs and religious traditions of the UAE can be somewhat hidden.

The Sheikh Mohammed Centre for Cultural Understanding (SMCCU) was established in 1998 to help address some of these issues through a series of year round educational programmes. Every evening during Ramadan the Centre welcomes visitors and residents to an Iftar feast. Learning a little more about Islamic traditions by sharing some of the dishes that are typically eaten to break the fast is a charming concept and the volunteers who host these evenings go out of their way to made this a special experience.

Aside from trying a wonderful array of local food, in an atmospheric and historic part of town, the evening also featured a visit to the nearby mosque during prayer time. Our hosts included a group of impressive young male and female Emirati volunteers who were keen that the assembled guests should have plenty of opportunity to ask them questions after the meal.

The food was beautifully laid out, buffet style, on a mat in the centre of the hall and once the fast had been broken with water, dates and Arabic coffee the dishes were explained and we all helped ourselves – several times. There must have been at least a hundred people for the meal but it was one of the most civilised buffets I have been to. 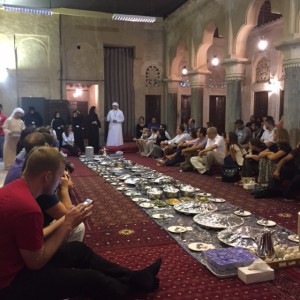 This is a selection of the food and drink we enjoyed. Many of the dishes were understandably very filling!

• Arabic Coffee –served at the start of the meal, this is a drink of hospitality and is a blend of lightly roasted Arabic beans, cardamom and saffron which is ground and boiled. The coffee is strained and served hot in small cups

• Machboos is a rice dish similar to biryani. The rice is seasoned and whole spices are added such as cardamom, cloves, cinnamon, dried lemon, yellow raisins and lentils. The dish is garnished with hard boiled eggs 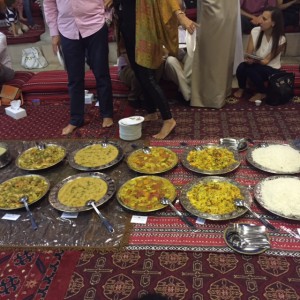 • Saloona – an Emirati stew of vegetables with lamb or chicken

• Fareeth – this was explained as Emirati ‘lasagne’ – thick layers of bread, covered with a stew of spiced meat and vegetables that have been braised until soft

• Harees – a thick, savoury porridge made of wheat, meat and butter 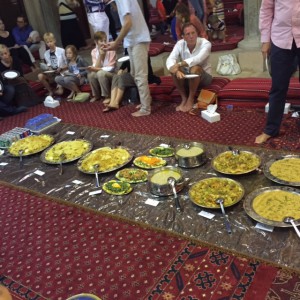 • Ligamat – the Emirati version of doughnuts, served with lashings of date syrup

Ramadan is a serious and important time of year. Self-imposed deprivation encourages those who fast to face their weaknesses, admit their faults and strive for self-improvement. One of the delights of this evening was how this and much else about the culture was explained with humour and humanity. One of the volunteers explained that she had stayed in bed till 1pm that day to make the fast easier and was finding it hard to fight her tendency to be lazy. Another said she recognised how she needed to control her temper because fasting made her more irritable than usual with her siblings.

The spokesman for the group of volunteers could easily have a career in comedy. He was hilarious, particularly on his experience of the western world’s misconceptions of Arab culture. At best, he said the assumption is that he is rich, owns an oil well and must have several wives. He was quite good on the worst assumptions too, particularly terrorism and must have taken some lessons in delivery and attitude from the Jewish comedian, Jackie Mason. The punchlines were as profound as they were amusing and there was a genuine warmth and empathy to his riff on the affinities between religions and the respect he has for faith in general.

The questions were a little tame and even though the hosts said we could ask anything it felt a little rude to be too provocative. I would have liked to have asked if the influences from all the different cultures in Dubai ever cause conflict for Emirati teenagers and their families. Do young people ever rebel and try to push the boundaries? Probably not, judging from the question on dating which revealed a controlled and supervised pattern in which ‘suitable’ ‘approval’, ‘engagement’, swiftly followed by ‘dowry’, is the norm. Nothing casual, experimental or risky about dating in this culture

The issue of clothing did come up and one of the younger women said that no one forced her to wear the abaya. She wanted to wear Emirati national dress and she wore hers with pride. Male Emiratis wear the kandura. Someone asked her what she thought about visitors to her country that dress immodestly. “Nothing at all, it is their choice”.

Such a non-judgemental attitude has to be admired when so many westerners take the view that women who cover up for cultural and religious reasons must, by implication, be oppressed.