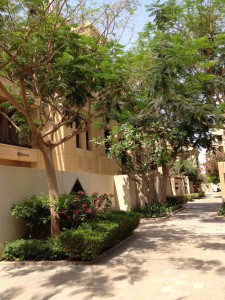 Three months have gone by since we moved to Dubai so it seems a good moment to pause and take stock of where we are with the ‘settling in’ process. How do you know when a place feels like home and what are the significant factors that help new arrivals to feel at one with a different culture?

By its nature Dubai is a place that attracts people from all over the world. ‘Melting pot’ is a clichéd and somewhat inaccurate description of multicultural societies generally but in Dubai, particularly so. I love it that I live in a place that welcomes so many different nationalities but as a new arrival I needed to find where I belonged first and initially sought contact with other Brits. I am sure that most expats, wherever they come from, feel the same. I have had to get used to the fact that most people I meet are a good deal younger than me and because of that we don’t always share the same cultural references!

The cleaner is Filipino (this is practically compulsory), my hairdresser is Lebanese and the maintenance guys for our apartment are Indian. In the last month I have had lunch with a Korean, read books and plays with women from Tunisia, Australia, Wales, the USA, Northern and Southern Ireland and met visual artists from France, Russia, Germany and the UAE.

I am not aware that Emirati people complain about immigration to their country as certain groups in the UK do. Cultural richness, diversity, not to mention useful skills and cheap labour are welcome here as long as local laws, religious observances and customs are respected. As a guest in Dubai, this is not hard to do.

Drinking alcohol in public is not allowed, but that doesn’t mean you can’t drink alcohol. Likewise, drunken behaviour in the street is not tolerated though I can’t help feeling that it would be a good thing if the UK was a tad less tolerant of this kind of thing too. Freedom to witness fellow citizens collapsing on the pavement, vomiting into the gutter in a state of undress is not a freedom I cherish.

As a woman I feel completely safe walking around on my own after dark in Dubai. True, I live in a very central and brightly lit area but nevertheless the statistics show that the UAE has world’s lowest violent crime rate. Whilst Westerners may think otherwise, women are highly respected in this society. That means on the occasions Tim has to travel overseas, there are no concerns for my safety or security. As a new arrival, that feels very good indeed.

For the first couple of months life in Dubai is much less about feelings though and much more about processes. Some rather dull and lengthy ones actually. First, to get the residency visa and then, the key to the magic kingdom – the Emirates ID. No one really exists until these documents have been issued, received and can be produced on demand. One of the many stages on the road to recognition involves taking a photo and fingerprints. When Tim showed up at the relevant office for his he had to negotiate a disorganised queuing system along with hundreds of other men. I, on the other hand, was ushered through to a separate area where just two or three women waited in a haven of calm and serenity. This respect for women lark definitely has its advantages.

The other essential is a local mobile phone. Every transaction you do, from booking a restaurant to withdrawing money from your bank account, is confirmed and recorded by text message in a way that would have seemed oppressive in the UK, but now seems normal and actually, quite useful! Invariably, a cash purchase in a shop will prompt the sales staff to ask for your mobile number so they can ‘keep you updated with special offers’ and I have learned to dodge that one as data protection is an unheard of concept here. Opening a bank account by the way, is a whole other story, especially if like me, you are a freelance worker with no ‘salary certificate’ issued by an employer. That’s quite a few Dubai boxes not ticked so hubby had to vouch for me! Ouch!

One issue continues to surprise us both. So many businesses here invest very little in their website presence. Information is often out of date and the general user-experience is clunky and unreliable, leaving the customer frustrated and ill-informed. We have now learned to always ring to make restaurant bookings as the management often establish new internal ‘rules’ for bookings that bypass the website altogether. Very odd.

I know where to go to find most things I need, apart from the post office, which continues to elude me. Nailing a postal delivery service from Dubai is next on my hit list. I never thought I would miss the British postal system and all its associated services but I do, greatly!

When we have a night out in another part of the city, returning to Downtown feels like going home but ultimately, it is the people you meet that help you make that leap.

Consider this everyday encounter on the busy Boulevard near our apartment a couple of weeks ago. For the very first time I spot someone I know from the book group I joined. She recognises me first, actually and waves hello. We stop and chat for a bit about work, books and the next meeting and then we go about the rest of our day. All of a sudden I feel much less of a stranger in town. Small steps.