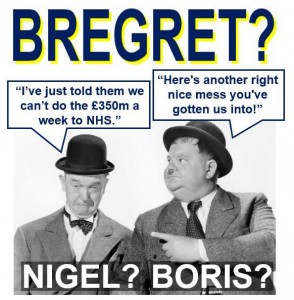 It’s been a horrible few days in my home country. I’m not sure which is worse – hearing about the fall out following the shock result of the EU Referendum from afar or being in the thick of it, so to speak. In a few years’ time perhaps one of our great comedy writers will devise a series showing us the laughable, you-couldn’t-make-it-up chaos surrounding the shock Brexit result but right now there doesn’t seem to be too much to smile about.

The consequences of a Leave victory seem to have come as a complete surprise to the winning side, never mind the rest of us. Overnight, the country seems to be in bits – emotionally and geographically. The PM has gone, the leader of the opposition is about to be ousted, Scotland could feasibly leave the Union and while we fancy taking our time, the rest of Europe want us to pack our bags and get out sooner rather than later. Nothing about this was predicted and if anyone should start looking for pastures new it should be the commentators, the pollsters and the pundits.

I don’t recall a single moment in any of the debates where anyone was quizzed on what could happen, in the unlikely event that………What if Scotland voted in a different way? What if Cameron is on the losing side? What is the plan after the result is known? Who is in charge?

It is heart breaking to hear about the divisions in communities and even within families and friends over leaving the European Union. If ever there was a need for charismatic and decisive leadership it is now. Politics seems broken. When David Cameron and Harriet Harman were campaigning on the same side is it any wonder the electorate were confused and divided?

Hours after the results were known, a petition calling for a second referendum is circulating. How many people signed it without wondering for a second who the originator was? Turns out it was a student having a laugh, who suddenly found millions of people were taking him seriously. Well it worked for Boris!

You can’t have a second referendum because you didn’t like the first result. The truth of the matter is that some questions are just too important to be answered in a Yes or No way when the consequences are so devastating. So Mr Cameron I say good riddance. You messed up and I don’t expect the Queen to be ‘purring with pleasure’ over any aspect of this debacle.

In any challenging situation, there is also an opportunity. I just hope someone will emerge to find it and soon.