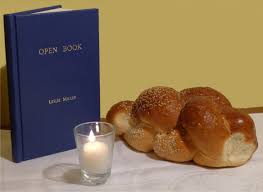 My paternal grandfather, Aaron Miller was a master baker and by 1920 he owned his own shop in London. People would travel across the city to buy the bread, cakes and pastries made daily on the premises at Millers, 43 High Street, Camden Town.  <!--more-->

The family had extensive living accommodation above and behind the shop, which was just as well because the Millers were growing.  On the 1st May, 1920 a third child was born to Aaron and his wife Annie. The son they named Leslie was my father.

Much of the story that follows was told to me in a series of interviews I recorded with Leslie in 2005. He died the following year, so without those conversations the details of our family’s baking heritage would have disappeared for ever. I’m so glad I asked the questions and can share the answers with my two sons, my brother and his two daughters, in my unpublished Open Book that tells his life story.

My published book, Where are the grown-ups? is mainly about my mother’s family but includes a scene explaining how my parents met, using some of the details outlined below.

Aaron died many years before I was born and it is no exaggeration to say that his dedication to baking contributed to his early death.  It is likely that Aaron’s ambition and drive was sparked by the achievements of his father, Solomon.

Census information and other records indicate that from 1881 to 1901, Solomon Miller, moved his family from lowly Whitechapel to a smarter address on Shaftesbury Avenue. Formerly a jewellery dealer, he opened his own bakery and confectioner’s shop on a site now occupied by the Ola Café and Bistro.

The young Aaron learned his trade in the shop and also at a high class patisserie on Oxford Street.  By 1911 he had his own shop in Camden Town whilst his father, mother, five sisters and three brothers moved from Shaftesbury Avenue to 104 Askew Road, Shepherds Bush, where they too ran a successful bread and cake shop until the early 1950s.

Of all Aaron’s four children, Leslie was the one that showed the most interest in the practical side of baking. During the day Aaron employed a number of specialist cooks and confectioners to make the cakes and pastries and then he worked with two other bread makers through the night. As a youngster Leslie was sometimes allowed to go into the bake house and help the pastry cooks. Initially, he’d be sent to the storerooms to fetch the ingredients, but soon he was learning alongside the professionals.

The family businesses were doing well in the 1920s and Aaron made what he believed to be some astute investments on the stock market. Like many others he was stung by huge losses in the wake of the Wall Street crash.

Both shops remained open during the Depression that followed but takings were low. People still needed bread but cakes were regarded as luxury purchases by people without jobs.

By 1936 the situation started to improve. By this time Leslie was sixteen and it was clear that he had ability and an interest in baking and cooking. Aaron took advice on the best way to nurture this talent and Leslie was enrolled on a three-year training course for chefs at Westminster College.

Life for the Miller family changed forever on 12th May 1937, the day of the Coronation of King George V1. The day was declared a public holiday and Aaron gave the night bakers the day off.  He had been chastened by the hard times of the previous years so rather than close the shop and lose business he decided to bake all the bread himself. He toiled through the night, lifting and carrying 240 pound sacks of flour on his back. In the early hours of the morning he struggled upstairs to their living quarters, clearly in terrible pain.

The doctor was sent for and Leslie’s uncles in Shepherds Bush were told he had been taken ill but nothing could be done. A heart attack proved fatal. Aaron was 59.

The people who worked for him and those in the shops around were devastated. On the day of the funeral the street outside the shop was packed with people that wanted to pay their respects. As the funeral procession went on its way to the cemetery, tram drivers took off their hats and a policeman on the street saluted.

Leslie’s mother Annie took over the running of the shop, assisted by her daughter Ida.  Sadly Aaron didn’t live to see the success his son achieved in his chosen profession.  One of the top students in his year at Westminster College, Leslie went on to further training in Paris, returning to London to take up a position in the kitchens of the Russell Hotel where he was rapidly promoted until he was called up in 1939.

Leslie was stationed in Egypt until 1944. During this time he received a letter explaining that his mother and sister were safe but the shop in Camden Town had been bombed. The building behind had taken a direct hit and several homes and businesses on the High Street were destroyed in the blast.

After the war Leslie returned to the Russell Hotel as Head Chef. He met my mother Sylvia and they married in 1949. Unusually for the times, the guests were treated to cream gateaux, courtesy of the uncles who still ran the shop in Askew Road.

104 Askew Road is still a family owned artisan bakery trading as Laveli. A Slovakian husband and wife team, Libor and Veronica Matlovic own three shops.  They make 12 types of bread, pastries, savouries and biscuits on the premises – just like the Millers before them.

This article was first posted in 2012 and written as a guest blog for https://edwardiangrandmabakes.wordpress.com/