I have been uncharacteristically quiet on the subject of food since we landed here. Holed up in a hotel for two weeks brought some highs and lows on the eating front, particularly as we have been staying at one of Dubai’s less grand establishments on a bed, breakfast and dinner basis. We haven’t always taken dinner though – two days in we gave the ‘dish of the day’ a whirl and what they did to a poor innocent piece of tuna scared us off. Overcooked, to the consistency of a rubber ball it was hard to believe it was once a fish. It was almost impossible to swallow which is quite a feat of achievement on the chef’s part. Luckily, we could fill up on the salad buffet which, save for an overcooked pasta creation, had been prepared with minimal interference from the kitchen.

On our second night we ventured out to InterNations a well-established worldwide organisation for expats. Their events are a great way to meet people from all over the world and to pick up a few tips from those that have been here a while. Bernard from France and Karol from Germany suggested we visit the Irish Village. You’ll love it they said. Irish Village? Sounds like it could be a bit naff, but on the map it looked like it was walking distance from our hotel, so we gave it a go.

Yes, it is an Irish-themed pub at heart but with a huge terrace area, live music and down to earth menu. It’s relaxed, friendly and of course the warm evenings make it super popular with all nationalities – and special guests. Bob Geldof is playing here on St Patricks Day and comes every year. That reminds me – hey Bob, you’re In Dubai! I think this town could make serious steps towards making poverty history, don’t you think?

For a traditional roast dinner, an Irish stew or a pint of Guinness, this is definitely the place to come. I have to admit we wolfed down the plate of roast lamb and all the trimmings with some pleasure. OK, the Yorkshire puddings were shop bought and the gravy was a little strange but the sublime, creamy mash and perfectly cooked cauliflower and broccoli indicated that this chef was not only cooking with gas – he knew when to turn it off too. Always helpful.

The Irish Village is just one of a number of different decent quality eating and drinking options on this site. The Italian and French restaurants we tried were both good. Just as well, as with Dubai’s Tennis arena also close at hand Andy Murray and the rest of the world’s top tennis stars could be dropping by for a quick bite during the Dubai Duty Free Tennis Championships this month.

I picked up from a foodie contact that great curries are to be had in Dubai, if you know where to go. So true in Yorkshire too. Look for a good curry in Harrogate and disappointment awaits. Local knowledge is needed to point you to curry perfection a few miles up the road in Leeds or Bradford. A work colleague of Tim’s did us a massive favour by bringing us to Ravi, his favourite Dubai curry house, in our first fortnight.

The large frontage occupies a prominent corner plot with waiting staff carrying laden trays from a tiny doorway at a constant pace. Locals are queuing for takeaways and the rough and ready tables, set up on the street outside are packed with diners. A little further along there is an open window where the fluffiest, freshest roti bread is being shaped, rolled and cooked to order. 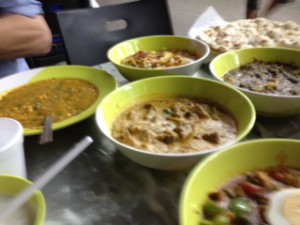 Maybe it was because I was exceptionally hungry or perhaps it was the vibrant atmosphere but I would go as far as to say that this was one of the best curry experiences I have ever had. Mutton Handi, Chicken Ginger, Saag Aloo, Mutton Jalfraizi, a side dish of Daal and those sublime roti breads. Way too much food but all in the name of research. What impressed was the quality of the ingredients and the care in the preparation. Juicy, flavourful chicken and meltingly tender, properly trimmed lamb. Each dish had its own depth of flavour and the different spices, sauces and colours made every dip of the bread very moreish. At roughly £18 for three people, it was cheaper than Leeds and Bradford.  It didn’t feel like Dubai at all!