‘Yeah, it was really good fun.’ I quote Tim, the erstwhile ‘non-actor’ among us, after making his highly effective stage debut in Dubai at the biggest ten-minute play festival in the world. Turns out he’d love to do it all over again. Just one of the unexpectedly wonderful things that came out of writing, directing and performing at this year’s Short +Sweet Festival of Theatre.

We did just great, making it through to the Wildcards final at The Junction theatre and tying second place with some worthy contenders. Way better than I could possibly have imagined several months back, when I found myself staring at a blank screen, a plateful of biscuits within reach, waiting for inspiration to strike. Fast. 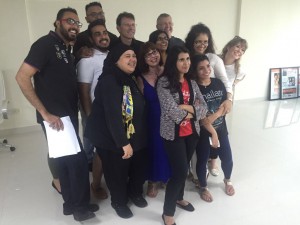 In September 2016, a bunch of us signed up to learn the basics of ten-minute playwriting from Alex Broun, a master at the craft of the short play and much else. After giving due consideration to what makes a script ‘theatrical’, how to write great dialogue and devise memorable characters, we had been charged to return the next day with our freshly created play script. Oh, and some actors are going to be turning up to workshop all the plays, so make sure you bring enough copies. Yeah, will do!

Where to start? Everyone else seems to have lots of great ideas that will easily translate to the stage. I have one idea that I keep coming back to and it’s quite complicated. I want to write about an actor and the process of acting. I have this troubled actor called Mike in my head, who confesses a secret to the audience. I fancy the idea of breaking the 4th wall and this confession could reveal something about Mike’s stage life and his real life. I love black comedy so I’m aiming to make the script darkly funny, entertaining and at the same time, intriguing.

If I can pull this off, the audience will be watching a play, a rehearsal of a play and a comic crime scene. All at the same time. The only person not in on Mike’s audacious act of revenge against his indiscreet co-star George, will be the hapless director who thinks her two actors are giving the performances of their lives. Still with me?

By 1am that night I have the barest outline and in the workshop the next day, with a few tweaks, it seems to have potential. The plan is to improve the script and submit it for Short and Sweet 2017. I’d love to see what a director could do with it.

It’s Short and Sweet Festival Director Liz Hadaway that suggests (quite firmly actually) that I should direct it myself. Really? Of course, she’s right. Unless you’re a tried and tested Short and Sweet playwright, or the equivalent of Neil Simon, the chances of a director picking your random, untested idea and running with it are not exactly nil, but pretty close. Write and direct, but the golden rule is, don’t act in your own play. Righto, I’ll direct it then. All I need now are four actors. Easy!

There’s a lively theatre scene in Dubai and some amazing talent. Everyone wants to entice the best actors for their play and competition is fierce when it comes to casting. I have a background in theatre but no track record in Dubai so no one is going to be beating a path to my door anytime soon. There’s always auditions though. A chance to see actors doing their thing and spot someone that will be just right for the four parts in my play. This is where my Short and Sweet journey starts to get interesting. A ten-minute play, to be performed in February and I’m starting to scout around for actors around October? It isn’t a minute too soon, believe me. For a start, one of the parts has next to no dialogue – not a very appealing prospect for most actors.

Taking my seat alongside at least twenty other directors I spot a few likely candidates, note down their details and make contact. Every other director is doing the same thing. Let’s be honest all this attention goes to some actor’s heads. It would go to mine too.

In the communications that follow, some actors decide they need to audition the director! One, who will remain nameless, sent me an outrageously rude reply after I emailed him the script! Whoa! Who asked you for a review? No thanks, not for me, would do! Others who claim to be auditioning for a role in Short and Sweet tell me they’re not available for the performing dates. Why audition then? Others won’t commit in case a better offer comes along a little later. Annoying. Suddenly this Short and Sweet thing seems a bit too difficult for me. What started out as casting feels a bit like speed dating, not that I’ve ever tried it, but that’s what I imagine it feels like.

I decide to ask a few people ‘in the know’ for some word of mouth recommendations and also get some very helpful responses and positive feedback on the script, just when I’m starting to lose my nerve. Sincere thanks. You know who you are. After advertising for actors on the Short and Sweet Facebook page, my cast is complete – for a while.

The work life of most people in Dubai is demanding – long hours and unpredictable schedules. Greg, my leading actor is rock solid reliable from day one but gathering all the other cast members together at the same time, for more than two consecutive rehearsals, starts to feel like herding cats.

Throw in the Dubai traffic and the difficulty of getting anywhere on time and the rehearsal schedule goes out of the window. Meanwhile the performance dates are in sight. Despite everyone’s best intentions or expectations two of my four actors drop out in January. Meanwhile ‘George’ seems allergic to rehearsals – a real speed dating disaster there but moving on, what to do? Part of the solution is close at hand.

Who will always turn up to rehearsal? Who will be supportive and helpful at all times? Who could actually do this quite well? Who will be happy to take direction? Who needs a challenge and some fun, outside of work? Yay, Tim!

ME: OK, I think you could do this, Tim. It’s a bit of mime and just three lines of dialogue at the end.

TIM: Are you out of your mind? I’ve never acted in my life.

ME: I know but there’s nothing to it, really. I’ll coach you. In fact, I’m going to be in it too now! Not ideal I know, but the only female role needs to be filled too and it’s easier if I just do it myself at this stage.

ME: No need. Don’t panic about the lines! The miming and acting dead you’ll have to do is much more difficult!

At about the same time I get a brilliant recommendation for an actor to take the role of George and when Ahmed comes on board the script springs to life. My two leads have worked together before and the chemistry between them ratchets up the performance overnight.

The pair continue inventing ‘business’ and coming up with funny new ideas at every rehearsal and soon we’re all excited about getting it in front of an audience. Will people get it? Is it even funny?

Plays in the Wildcards section only perform once but we go further in the competition than we dare to hope for, so we do two shows. There are plenty of laughs and some terrific feedback from audiences and judges after both. A big thank you to the friends who came and supported us and the people we didn’t know that said they enjoyed Just Playing.

And Tim? He channelled his inner Marcel Marceau to perfection and as Nick Brocklebank’s magnificent action photos show, he’s a natural!

Short and Sweet is a competition. We salute and congratulate the worthy winners. The Gala Final was a brilliant evening of theatre and hats off to everyone who came so close at every stage. It’s tough when only one or two votes separate the top choices. It’s not the winning but the taking part? Maybe, but I recently came across a quote by children’s author, Rachel Hamilton that I prefer.

‘There’s more to winning than being first.’

There were four of us on the Just Playing team – big thanks from me to Greg Lunn, Ahmed Syed and Tim Badley. Also to Tom Badley who read the script remotely and created an eye- catching poster and image that we could copy onto the actors’ T-shirts for further impact, and Farheen Khan for invaluable assistance during technical rehearsals. 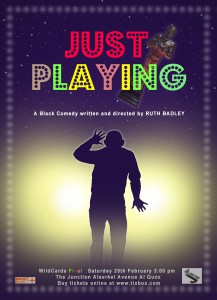